The Story of Starbucks in Australia is an Interesting One

I do remember when they first opened stores back in 2000, I was so excited. I hadn’t been to a Starbucks in America yet (my first trip to the States was in 2012). There was a store close to me so I excitedly went and ordered my Venti Latte and took a sip. I remember thinking what was the fuss about? This coffee was not nice at all and as we all know, Australia has amazing coffee.

I didn’t go to an Australian Starbucks again and not many people did as Starbucks closed their stores as fast as they opened them and closed a vast majority of them by 2008.

When I did go to America in 2012 I was not interested in trying a Starbucks coffee there. I was in New York City where there is one on every corner so I ended up having one in desperation one day. Desperation of needing caffeine and something to eat. (as a coeliac, there are not many options to eat safely on the spur of the moment)

So I grabbed a Venti Latte, added an extra shot and realised it was delicious. Not sure why? Was it the extra shot? The fact I was drinking an American icon in NYC? But after that day I had one every day and upon coming home, searched for a Starbucks in Australia.

I really didn’t have much luck, but slowly but surely Starbucks Australia opened more stores and I went and tried one, maybe two, maybe many many more. I really enjoy the lattes and all it took was an extra shot (or two!). I am lucky to now have a few stores within a reasonable distance to my home.

**Something to note if you are a coeliac like myself or require gluten free food products, Starbucks Stores now serve Oat Milk in lattes and frappes and Oat Milk in Australia is NOT gluten free. I did ask Starbucks Australia to confirm Oat Milk is used and they confirmed that and advised that the heat wand is cleaned after the oat milk is heated but there is still the cross contamination risk. Personally it is far too risky for me and sadly I won’t be drinking lattes from Starbucks again. I will stick to their Starbucks at Home range (mentioned below)

Check out my list with the Starbucks Australia stores. Here is a link to their website if you’d prefer to go there.

I have been to the States many times and each time I am there, the first thing I do when I get off the plane (and get through pesky customs) is hit up the Starbucks in the airport. I only get the lattes though as the flavoured drinks and frappes may not be gluten free. Which is a shame but a visit to the grocery store there changes that.

In America, Starbucks have a huge range of products in their grocery stores. Many delicious things like k-cups (coffee pods), creamers, cold drinks and cold brew. I discovered the cold Starbucks Pumpkin Spice Latte and Peppermint Mocha Latte in large bottles in the grocery stores in America and my they were delicious! And as a bonus for me, they are also gluten free. So while I couldn’t have the flavoured drinks in the Starbucks cafe, I could have them from the grocery stores.

In the Australian Starbucks stores, they have flavoured drinks and they have the seasonal ones at the same time as the USA stores. You can also buy instant coffee to have at home.

Recently Starbucks partnered with Nespresso and have Nespresso pods that you can buy at Coles, Woolworths, Amazon Australia, Big W or IGA and take home and use in a Nespresso machine. There are many varieties and such an easy way to enjoy Starbucks at home in Australia.

The best part is that these pods, as well as Starbucks Roast instant coffees, the instant lattes (yum!) are available at Woolworths, Coles, Amazon Australia and Independent supermarkets. The supermarkets and Big W also have a range of the Nescafe Dolce Gusto which is compatible with that particular coffee machine.

Starbucks have some of the best merchandise, I love their mugs and reusable cups and have quite a range of them.

You can usually get these items in store but what is exciting is that they now offer online ordering! Go to their Shop at Home website to shop away!

October 2021 – I feel I must update this and let you all know that I ordered some items online. I received my items quite quickly but one item was missing. It took 5 1/2 weeks for them to get the correct item to me. It wasn’t due to postal delays as I got an email once it was sent and it took 3 days to arrive. There was lots of emailing back and forth with them as well so it definitely was not a smooth sailing experience. It has left me disappointed.

The Starbucks Frappuccino Coffee drinks are loved by those who drink them.

I have found them in 3 store locations:

If you see these little guys out and about, I’d love to know if you can drop me a line and let me know please! 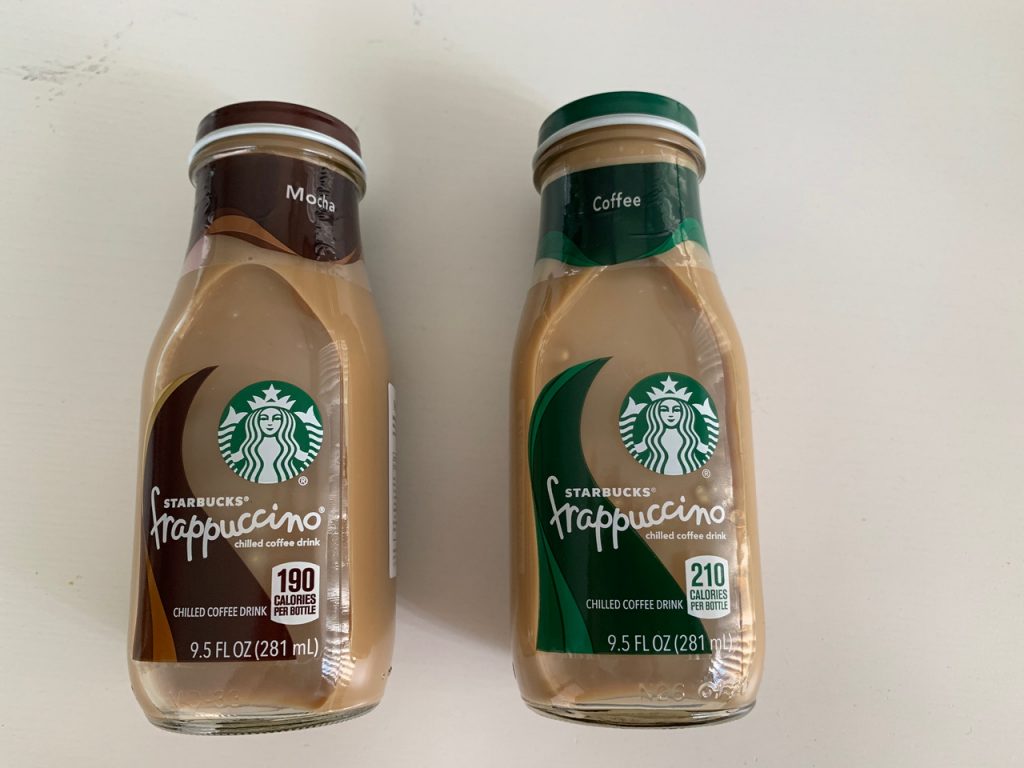